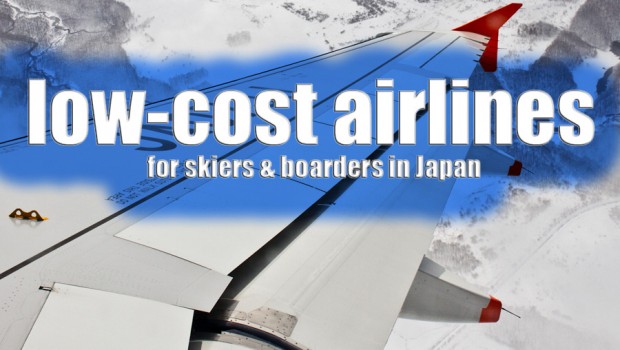 While the JR Pass is your best overall Japan transportation option, many skiers & snowboarders will need to rely on at least one flight between Honshu and Hokkaido to maximize powder-play on both Islands.

Low-cost flights in Japan are the most economical and time effective way to chase powder on back-to-back days from one Island to the next.

As of 2014, there are four (4) low cost air carriers in Japan offering useful routes for skiers & snowboarders between Honshu and Hokkaido. There are a few additional budget airlines, but they are not good options for powder seekers as they don`t access major ski regions.

Snowtrip Tip 1, Fly 5x faster than the shinkansen for around the same cost.

Although estimated average total costfor long-distance overnight trains vs. low-cost airlines in Japan is comparable (which includes the added cash due to accommodations with a flight), value isn`t simply quantitative. It`s also about being relaxed, rested & ready to ride. Sometimes paying the extra cash for a 90-minute flight on top of your JR Pass expenditure to go from point A to B quickly is the best choice.

Booking a low cost flight during your skiing & snowboarding trip in Japan will let you chase storms from one Island to the next in a matter of hours, instead of days.

If you don`t want to spend an entire day traveling overnight on the train or bus — which might mean sacrificing a precious good-weather snow day — a low cost flight in Japan is a great solution. Lengthy overnight shinkansen are expensive and overnight buses in Japan will leave you less than rested from sitting upright during a bumpy half-day journey.

Snowtrip Tip 3, Be flexible but don`t lose money doing it.

Just as hopping a quick 90-minute flight can help you arrive in time for freshies the next day, blizzards often accompanying that snowfall can obviously have a significant negative effect on your flight plans.

We recommend purchasing flexible fares allowing you to change flight times/days in order to adjust to volatile winter weather in Japan. The costs for felxi-fares on airlines like Jetstar and Peach are relatively minimal compared to the alternative outcome.

The best alternative to quick, low-cost flights in Japan between northern Honshu and Hokkaido is the overnight train connecting Aomori & Sapporo. The Hamanasu Express is the only rail option that allows you to ski & snowboard on back-to-back days on different Islands, while arriving comfortably rested and sans accommodation expenditures.

If you have time to ship your skis & snowboards with a delivery service in Japan you might not save much money compared to airline baggage fees, but you`ll save yourself the hassle of trudging up-and-down staircases in train stations & airports with your giant gear bag.

However, if you definitely need your plank(s) the next day, it`s best to travel directly with your gear. This will alleviate the risk of missing overhead blower pow because your equipment is in transit. Ski & snowboard delivery is very reliable in Japan, but you`ll normally need minimum 2 days for it to arrive (possibly 3 days if traveling between Honshu & Hokkaido).