If you`re planning to ski or snowboard in Japan on main Island (Honshu),  Narita International Airport (NRT) is normally your [… 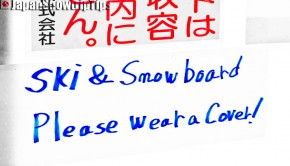